I was keeping a photo blog for a little while (Moonlighting), and then the poor little thing languished. I decided that I wouldn’t let it go without a fight, but I knew that I would have to make it a little easier to deal with. And so, it got absorbed into my ‘general purpose’ blog.

I’ve transferred my photos here and they can be found easily by simply going to the Photography category over there on the right. I also brought over the Self-Portrait.

In 1993, I bought a Pentax K1000 with a Takamura 28-80mm zoom lens. I bought it as a combination college graduation/22nd birthday gift for myself. I have always loved being behind, not in front, of a camera and I wanted to learn how to take really good pictures. What I did not want was a camera that would take good pictures for me, so of course, I looked for something completely manual and bare bones. All these years later, I still love my Pentax and think of it as my primary camera.

My second camera came to me in the late 90s. It is a Mamiya 645 Pro TL medium-format camera with a fixed 80mm lens and a 120mm macro lens. This camera was remarkably a gift from two very kind people who saw my pictures and thought they were good enough that I needed a serious camera. I’m still working out how I want to use it in a way to expand my range and differentiate it from the Pentax, but it sure is fun to play with.

My next two film cameras came in quick succession. For a number of years, I was distracted from my photo hobby by…well, life mostly, and in these past few years as I’ve been rediscovering it, I’ve also realized that I want to continue pushing what I can do with a camera, rather than letting the camera simply do the work for me. I still resist cameras with automatic options, and so I decided to go to older cameras when my attention was brought to the existence of what are known as Former Soviet Union cameras. They are essentially Russian-made reproductions of cameras such as Leicas and Voigtlanders and have a bit of a cult following. I got my Zorki-6 – a 35mm range finder – as a 40th birthday present, and my Lubitel-166B – a twin lens reflex medium-format camera – came a few months after that. The latter is to satisfy my urge to try my hand at lomography.

The most recent additions to my camera shelf are a Pentax Spotmatic and an Olympus 35RC. The former is basically the same camera as the K1000 but a few years older. It belonged to my brother-in-law and had been in a box for probably 20 years, give or take a few. One day at brunch at my sister’s house, he and I were discussing photography and he decided to give me the kit since he never intends to shoot film again. I got the body and case, three lenses, some hoods and filters, and half a roll of Tri-X that he’d forgotten was in the camera. Here’s what 20-year-old Tri-X looks like.

The Olympus was another birthday gift. It’s a small rangefinder with a fixed lens, and it’s the perfect camera to just throw in my bag and carry around with me so I can shoot some film without lugging around many pounds of gear. It’s mostly manual but has a shutter-priority setting and a light meter, so it’s good for when I’d like to practice some street photography. For something so small that looks like a basic point-and-shoot, it takes brilliant pictures. 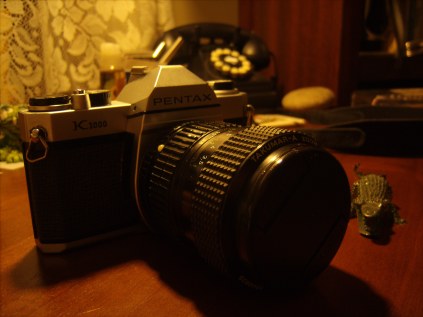 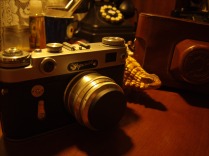 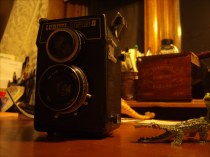 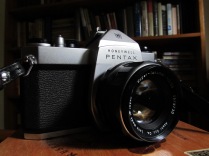 Several years ago, I broke down and bought a digital camera, whose pictures may make an appearance from time to time. It’s a GE E1235, 12.1 megapixel, 3X 7.5-22.5mm lens. I used it to take the pictures of all the film cameras above. It’s not too bad for an entry-level digital, though it quickly frustrated me. I couldn’t get it to do what I wanted to do. So in 2011, I upgraded to a Canon Powershot SX130IS. It’s got 12.1 megapixels and a 12x zoom lens. It’s much much better than the previous digital, which has been relegated to my car’s glove compartment for use in photo “emergencies.” The Canon will tide me over until I can get myself a decent DSLR camera.

So there it is.