Here’s the short version: A few years ago, I lost weight. 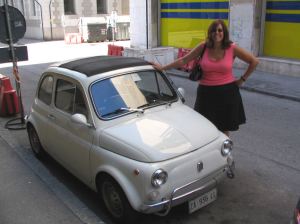 June 2006. How adorable is that original Cinquecento?

I’d struggled with weight issues my whole life, which isn’t really a new story these days. In April of 2008, I was well and truly fed up – I suppose literally as well as figuratively. There was no humiliating event, no panicked feeling, nor any inspiring revelation. The turning point for me, in fact, almost went completely unnoticed. I was sitting at an orchard with my sister and my mother, drinking coffee, eating doughnuts, and making a plan to start walking together every Sunday so we could lose weight.

The hubris of it all bitch-slapped me in the face.

Oddly enough, I didn’t make a big deal out of it. I didn’t yet recognize that my lack of overt reaction was actually a sign that things had just clicked into place. Finally acknowledging the truth about what I’d done to myself created a little bubble of calm inside of me, and I knew it was time to start doing something to be and feel better. On Sunday morning, I quietly went for a long walk. The next day, and every day for the rest of the week, I went for walks on my lunch break.

The following week, I pulled up a program I had used in the past to help me track my food. I did some calculations, figured out a reasonable calorie limit, and started tracking every bit of food I ate. At the end of the day, I held myself accountable. To deal with days on which I went a little over my limit, I added some time to my workout the following day.

Two weeks after that first Sunday walk, I stepped on the scale and saw that I had lost 2 pounds. That was enough of a spark to get things going. I dug out my weights and running shoes and got to work.

A year and a half after that sunny day at the orchard, I had lost 70 pounds. I had reached my goal – and then some – by following a very simple plan: eating less and exercising more.

I kept the weight off until last year when, for a combination of reasons, some of the weight started to creep back up. When my favorite skinny jeans started fitting me quite snugly, I knew I couldn’t fool myself anymore. And so, I was faced once again with the task of losing weight. At least this time it’s only 10 instead of 70 pounds that I need to lose.

The very dramatic foot-stamping and shouted promises to get back into shape had very limited effects. I’d have a great week and then, patting myself on the back for the good job I’d done, I would spend the following week sitting on my laurels…and ass.

Then, a few weeks ago, the real turning point came. I now recognized its anti-climactic quality.

It was a zumba commercial. I know what zumba is but had never seen this particular commercial for an Xbox fitness game. In it, a woman is in her living room, wearing uber-tight workout wear, showing her chiseled abs, and sweating up a storm. Then a friend joins her. They looked like they were having So! Much! FUN!

I shuddered and knew that it was not for me. Sure, it looks energetic and it probably burns a lot of calories, (somehow I feel the hipper term “mad calories” is called for instead.) Any cardio workout done for an hour at intensity is going to burn a lot of calories and help a person lose weight. And if zumba, or any other sort of workout-of-the-moment inspires people to start exercising and improve their health, then that’s great.

My preferred equipment. The weights, not the cats. They’re just moral support.

But it’s exactly the kind of thing that has never motivated or inspired me for more than a day or two. Why not? What will motivate me?

Part of it stems from my thought of how incredibly stupid I would feel doing zumba in my living room. Let’s face it; it looks kind of silly. Plus, it’s much too trendy and cool for me. Mainly, though, I don’t want to think of dancing as a workout. I love to dance, but the minute it becomes something I’m doing because I ‘should’ or ‘have to’, then it’s not fun anymore. It becomes a chore instead.

I prefer my dancing to be social or in my room behind closed shades. I don’t want to be distracted by whether or not a particular move was adequately working my core or my latissimus dorsi. I associate dancing with not trying to achieve any objective other than a feeling of freedom, of being completely in the moment, of simply having fun.

What it comes down to is that I’m very much a cards-on-the-table kind of a girl. If I’m exercising, I want to know that it’s exercise. I enjoy more traditional exercises and feeling the direct effect of my actions. I like feeling strong when I’m lifting weights, or the clearing of mental cobwebs when I’m jogging.

As I started to analyze the reasons why I was so opposed to a perfectly good form of exercise, that familiar calm settled upon me. I knew what I wanted. I needed to get back that feeling of strength and clarity that I had when I was regularly doing my jumping jacks and lunges, or driving out to the hiking trails to spend an hour sweating and breathing in the smell of the mountain.

So, to banish these sneaky 10 pounds once and for all, I’m avoiding what’s hot and trendy right now, and instead going back to my tried and true: less food and more exercise; fewer excuses and more accountability.

I’m sure some days, the calisthenics just won’t cut it. On those occasions, to shake things up a little bit, I’ll close the shades, crank the tunes up to 11, and dance around my living room. But it won’t be zumba. It will probably look more like this: